Georges Polti's "36 Dramatic Situations" list has been helpful in mapping out JIHADI, which I have now gotten up to 25,000 out of a projected 100,000 words. The list purports to categorize every dramatic situation that might occur in a story. I don't know whether or not it does that (Beckett? Pinter?) but it helps to clarify plots.

My protagonist is a butterfly; each of these is a potential cocoon.

Below excerpted from Wikipedia.

Each situation is stated, then followed by the necessary elements for each situation and a brief description, with the following format:
1. Situation
* Elements
* Description

Supplication
a Persecutor; a Suppliant; a Power in authority, whose decision is doubtful.
The Persecutor accuses the Suppliant of wrongdoing, and the Power makes a judgment against the Suppliant.

Crime pursued by vengeance
a Criminal; an Avenger
The Criminal commits a crime that will not see justice, so the Avenger seeks justice by punishing the Criminal.

Vengeance taken for kin upon kin
Guilty Kinsman; an Avenging Kinsman; remembrance of the Victim, a relative of both
Two entities, the Guilty and the Avenging Kinsmen, are put into conflict over wrongdoing to the Victim, who is allied to both.

Pursuit
Punishment; a Fugitive
The Fugitive flees Punishment for a misunderstood conflict.

Falling prey to cruelty/misfortune
an Unfortunate; a Master or a Misfortune
The Unfortunate suffers from Misfortune and/or at the hands of the Master.

Revolt
a Tyrant; a Conspirator
The Tyrant, a cruel power, is plotted against by the Conspirator.

Abduction
an Abductor; the Abducted; a Guardian
The Abductor takes the Abducted from the Guardian.

The enigma
a Problem; an Interrogator; a Seeker
The Interrogator poses a Problem to the Seeker and gives a Seeker better ability to reach the Seeker's goals.

Madness
a Madman; a Victim
The Madman goes insane and wrongs the Victim.

Fatal imprudence
the Imprudent; a Victim or an Object Lost
The Imprudent, by neglect or ignorance, loses the Object Lost or wrongs the Victim.

Involuntary crimes of love
a Lover; a Beloved; a Revealer
The Revealer betrays the trust of either the Lover or the Beloved.

Self-sacrifice for an ideal
a Hero; an Ideal; a Creditor or a Person/Thing sacrificed
The Hero sacrifices the Person or Thing for their Ideal, which is then taken by the Creditor.

Self-sacrifice for kin
a Hero; a Kinsman; a Creditor or a Person/Thing sacrificed
The Hero sacrifices a Person or Thing for their Kinsman, which is then taken by the Creditor.

All sacrificed for passion
a Lover; an Object of fatal Passion; the Person/Thing sacrificed
A Lover sacrifices a Person or Thing for the Object of their Passion, which is then lost forever.

Crimes of love
a Lover; the Beloved
A Lover and the Beloved enter a conflict.

Obstacles to love
two Lovers; an Obstacle
Two Lovers face an Obstacle together.

Conflict with a god
a Mortal; an Immortal
The Mortal and the Immortal enter a conflict.

Remorse
a Culprit; a Victim or the Sin; an Interrogator
The Culprit wrongs the Victim or commits the Sin, and is at odds with the Interrogator who seeks to understand the situation. 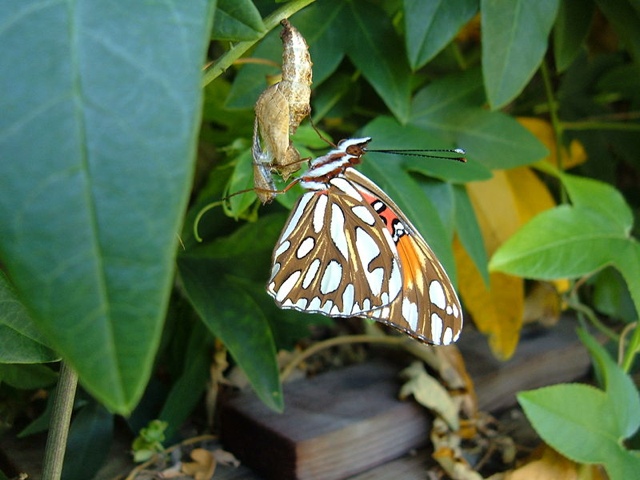 Posted by Yusuf Toropov at 4:52 PM

The title of the novel is JIHADI

... because I got feedback from multiple sources that the earlier title just plain sent the wrong signals. For the record, JIHAD means struggle and striving, against the Nafs (self) before anything else. It is a personal struggle for growth and fulfillment in alignment with the will of the Almighty.

Item One: It was a very good month, November of 2012. I had this dream of being able to read my first draft from beginning to end on December 1, but in reality I got something better from #NaNoWriMo: A daily routine. I am now holding myself to 1000 (not 1667!) words a day.

Item two: Now that the fever shakes of November have passed, I will be able to post here a little more regularly.

Item three: The first 14,000 or so words of the piece are beginning to look viable. After that, mind the gap. If you are working on a novel of your own and
would like to swap chapters for feedback/critique, drop me a line. 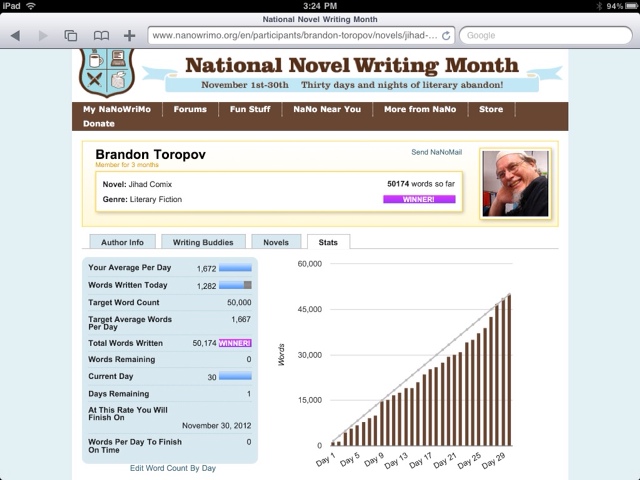 Posted by Yusuf Toropov at 4:34 AM

Email ThisBlogThis!Share to TwitterShare to FacebookShare to Pinterest
Labels: I did it
Newer Posts Older Posts Home
Subscribe to: Posts (Atom)