Mali Madness: Not In The Name of MY Deen

People claiming to be jihadis in Mali torched repositories of ancient manuscripts this week as they fled from the French, their former colonial masters. Screaming "Allahu Akbar" before you light up a trove of centuries-old historical artifacts is a little like saying "Bismillah" before you chow down on a pork sandwich.

Idiots. I can call you that without committing the sin of backbiting because I am addressing you in the plural. You are idiots. And if you have any example of the Prophet (s) incinerating a thousand-year-old library, I haven't heard of it. 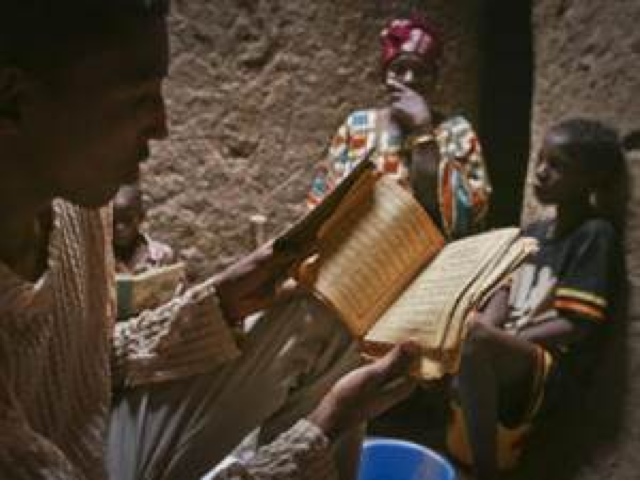 Posted by Yusuf Toropov at 4:52 AM

Below, my entry for today's photo-prompt-driven #flashfiction #55WordChallenge competition.

(If I wouldn’t play, Rachel announced, then she would go outside.)

Roscoe will keep an eye on me.

(The same chapter, nearly done. She asked where the hell Rachel was.) 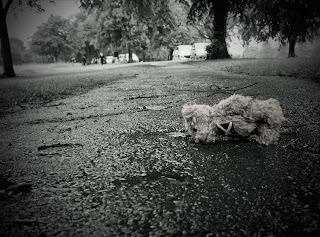 All In The Timing

Struggled with my word count yesterday (but hit it); nailed it today, with vigor and joy, before 9:00 am. So what was different? Timing. The successful process for moving forward on +JIHADI (novel by Brandon Toropov)  appears to be: Think of the scene the night before, before going to sleep; think of it again while showering; dictate and tweak after praying and feeding the cats. Yes, I believe praying and feeding the cats to be mandatory elements of my creative process.

Today's scene also benefited tremendously from a synchronous encounter with this brilliant Victor Frankl lecture. Thank you +Nina Mideast Journal for the share!

I was talking with writing buddy +L. T. Dalin about self-image and the writing process. During that good discussion, I think we each in our own way came to see the folly of "who I am" labels like "content developer" or "housewife" or even "novelist." We're just writing now. What anyone else from the outside puts on it is up to them. No label = Possibility.

I had a similar discussion about Possibility involving "aspirational narrative" figures like Wonder Woman and Superman with +Adella Thompson  and we reached similar conclusions. 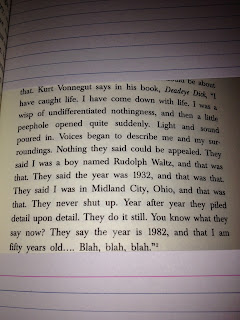 Then later I was talking to my DEAD writing buddy +Kurt Vonnegut (he's great over a cup of coffee, despite being dead and all) and we realized he had reached much the same conclusion in his novel DEADEYE DICK. The relevant passage appears above, in a cool segment I like to call "Blah, Blah, Blah."

Anyway, the novel is going fine, and my target date for completion of a readable draft is July 15. Hold me to it! The 2013 commitment is 500 words a day, and 2500 words edited every weekend. So far, so good.
Posted by Yusuf Toropov at 5:21 AM