These include ABNA competition reader reviews of which I took screen shots before the Powers That Be whisked my excerpt and its 4.7/5.0 average into the memory hole. Orenda Books publishes the ebook on December 24 and the physical book in February.

The PW review of the ABNA draft, which you can read more about here, called JIHADI: A LOVE STORY "smart and searing." (Note that PW reviewed every ABNA quarterfinalist's manuscript.) 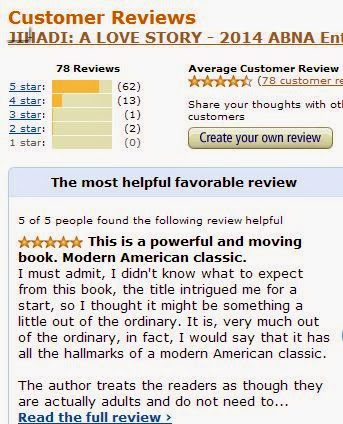 (She later wrote, after receiving and tearing through the whole manuscript:)

Then there's this from dear friends and patient beta readers:

Below is from +Richard Gibney : 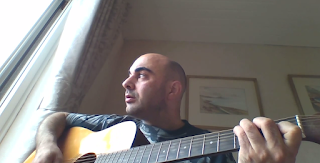 And one more review, this one from beta-reader +Adella Wright,  who has read a startling number of early drafts, as well as the final draft: 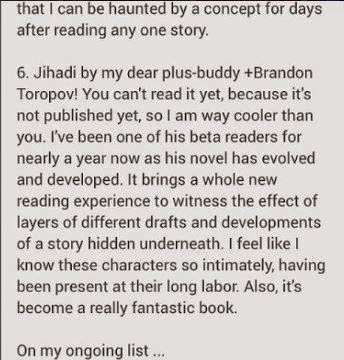 You can order the book here.
Posted by Yusuf Toropov at 4:33 AM

He's Got a Secret Plan to End the War

With honor. Or have you heard this before?
#nowariniraq 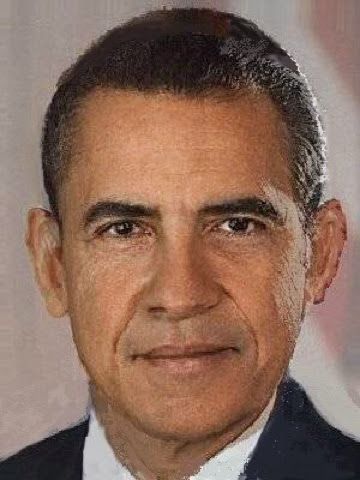 Posted by Yusuf Toropov at 5:29 PM

Elmore Leonard's ten rules for writing fiction are the micro ... and these are the macro.

Working on these, too. How many do you follow?

Posted by Yusuf Toropov at 3:00 PM

Note: It's been over a year now that I've been attempting to follow all ten of these rules. I believe I've now internalized seven of the ten. Here is the scoop on the three I continue to flout.

There was just no way to write JIHADI: A LOVE STORY without a prologue (Rule #2), though I didn't call it that. (There is no prologue in FREED, my second novel.)

I still fall prey to a "suddenly" (Rule #6) every now and then and forget to edit it out -- guilty as charged.

I do use big, fat paragraphs (Rule #10), and some readers do whine about that. I justify this state of affairs by a) interspersing the big, fat paragraphs with smaller paragraphs whenever I can, and b) reminding myself that Nabokov breaks this rule on what seems like every other page spread, and dammit, Beavis, following a master prose stylist's example once in a while can't be all that terrible a thing to do. By the way. People say the same thing about long sentences. Supposedly, no one reads long sentences. That's hooey. In fact. If you vary them with shorter sentences. What you find is that. Long sentences rock. Because. They pull intelligent readers in. And. Keep you, the writer, from sounding like an idiot. Who can only communicate. In tiny fragments. Of meaning. Comma. Someone who can't be bothered. To create sentences. That stand up. To prolonged examination. Much less the sustained scrutiny. Of a second pass. Which is what I want my best sentences. Like my best paragraphs. To attract.

So I guess I disagree with Elmore Leonard there.

I should say, though, that the guiding principle of skipping the dull stuff in Rule #10 is sound, and I have read plenty of published prose that ought to have followed it.

This blog post is first and foremost a reminder to myself: Follow the damn rules. After that, it's a tribute to Elmore Leonard. His list of rules for writers of fiction is the best of its kind, I think. Hemingway has some marvelous advice for fiction writers, too, but it's extracted by others from his writings and interviews, and it's not in a concise 1-10 format.

I have placed special typographical emphasis on Leonard's advice concerning adverbs. Deal with it.


1. Never open a book with weather. If it's only to create atmosphere, and not a charac­ter's reaction to the weather, you don't want to go on too long. The reader is apt to leaf ahead look­ing for people. There are exceptions. If you happen to be Barry Lopez, who has more ways than an Eskimo to describe ice and snow in his book Arctic Dreams, you can do all the weather reporting you want.

2. Avoid prologues: they can be ­annoying, especially a prologue ­following an introduction that comes after a foreword. But these are ordinarily found in non-fiction. A prologue in a novel is backstory, and you can drop it in anywhere you want. There is a prologue in John Steinbeck's Sweet Thursday, but it's OK because a character in the book makes the point of what my rules are all about. He says: "I like a lot of talk in a book and I don't like to have nobody tell me what the guy that's talking looks like. I want to figure out what he looks like from the way he talks."

3. Never use a verb other than "said" to carry dialogue. The line of dialogue belongs to the character; the verb is the writer sticking his nose in. But "said" is far less intrusive than "grumbled," "gasped," "cautioned," "lied." I once noticed Mary McCarthy ending a line of dialogue with "she asseverated" and had to stop reading and go to the dictionary.

4. Never use an adverb to modify the verb "said" ... he admonished gravely. To use an adverb this way (or almost any way) is a mortal sin. The writer is now exposing himself in earnest, using a word that distracts and can interrupt the rhythm of the exchange. I have a character in one of my books tell how she used to write historical romances "full of rape and adverbs".

5. Keep your exclamation points ­under control. You are allowed no more than two or three per 100,000 words of prose. If you have the knack of playing with exclaimers the way Tom Wolfe does, you can throw them in by the handful.

6. Never use the words "suddenly" or "all hell broke loose." This rule doesn't require an explanation. I have noticed that writers who use "suddenly" tend to exercise less control in the application of exclamation points.

7. Use regional dialect, patois, sparingly. Once you start spelling words in dialogue phonetically and loading the page with apos­trophes, you won't be able to stop. Notice the way Annie Proulx captures the flavor of Wyoming voices in her book of short stories Close Range.

8 Avoid detailed descriptions of characters. In Ernest Hemingway's "Hills Like White Elephants," what do the "Ameri­can and the girl with him" look like? "She had taken off her hat and put it on the table." That's the only reference to a physical description in the story.

9. Don't go into great detail describing places and things. Unless you're ­Margaret Atwood and can paint scenes with language. You don't want descriptions that bring the action, the flow of the story, to a standstill.

10 Try to leave out the part that readers tend to skip. Think of what you skip reading a novel: thick paragraphs of prose you can see have too many words in them. 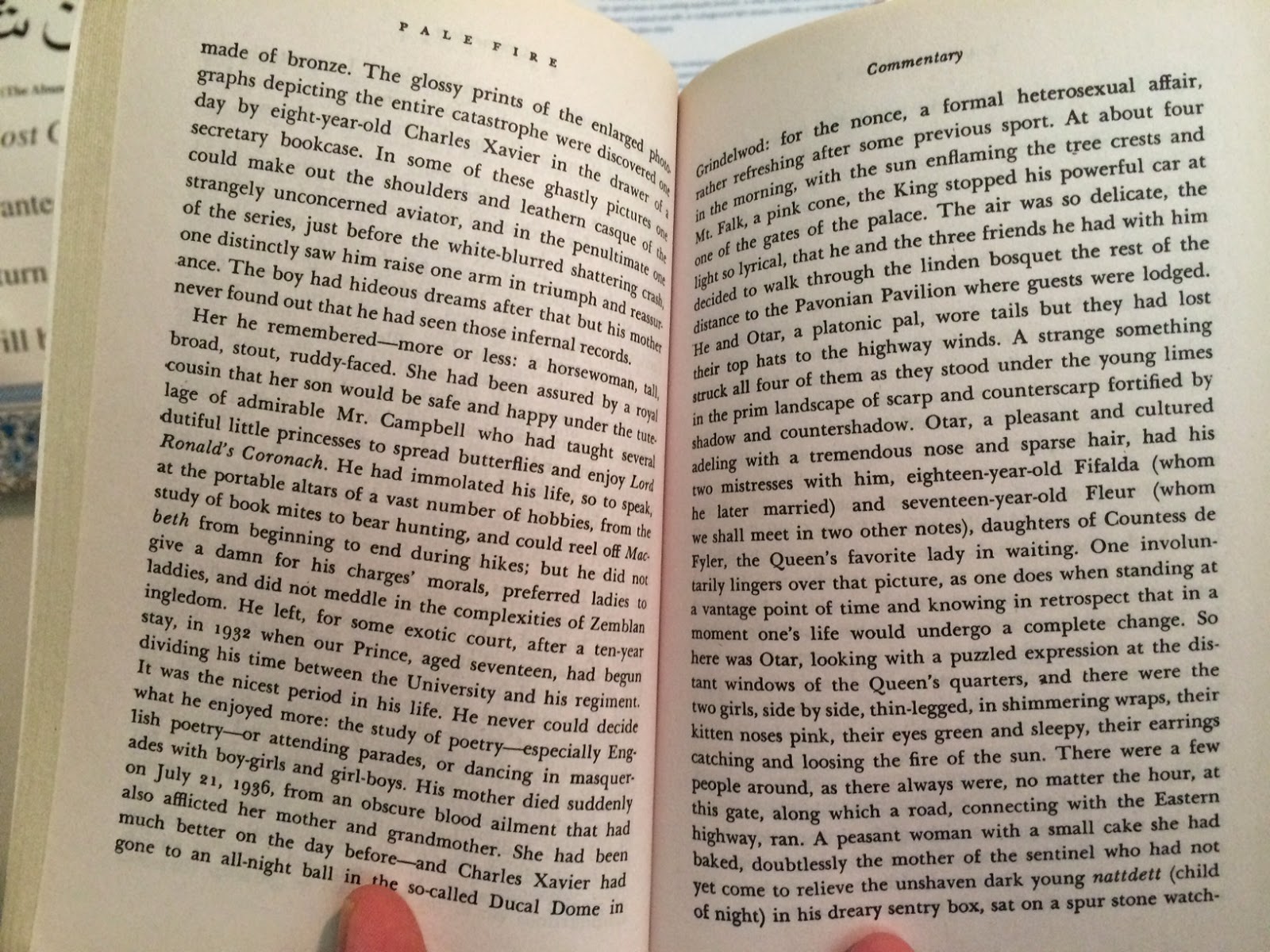 Posted by Yusuf Toropov at 2:06 PM

Email ThisBlogThis!Share to TwitterShare to FacebookShare to Pinterest
Labels: Literature

#BDS: 8 Brands US Consumers Can Boycott for Supporting Israel

If you don't like what Israel has done to civilians in Gaza, don't support these brands with your dollars: 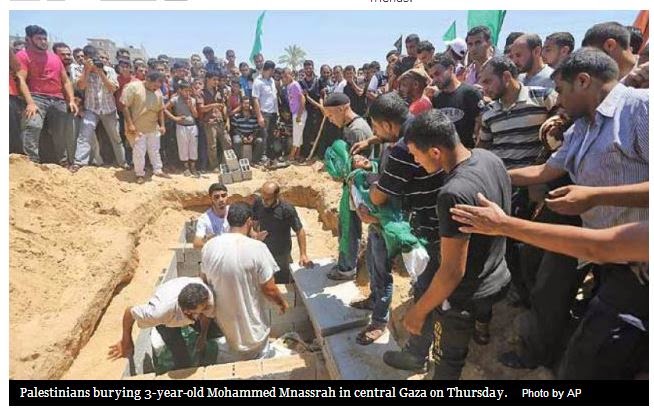 Posted by Yusuf Toropov at 7:00 PM

I didn't think this up, but it's so powerful and relevant each and every day that I wish I had. 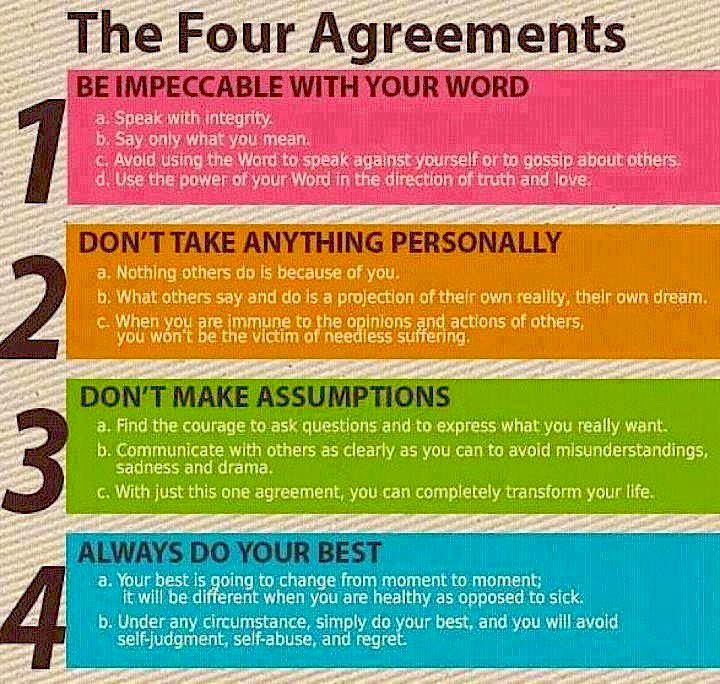 Posted by Yusuf Toropov at 2:04 PM

Consult this during next interview you watch about #Gaza

It will predict, in the correct order, what lies come out of the mouth of the Israeli spokesperson. 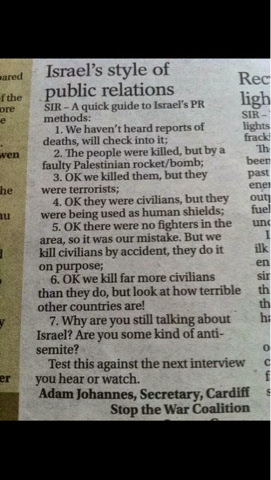 Posted by Yusuf Toropov at 1:41 AM

Wallace Stevens: After the final no ...

Posted by Yusuf Toropov at 4:33 PM