The Nativists Are Restless

And another election looms, this time with the proto-fascists and racists and xenophobes and haters seemingly better funded and more organized than ever.

I worry about this country sometimes.

Most of the time.

I suppose I will end up holding my nose and voting Democratic. Again.

But I am getting damned tired of holding my nose.

Posted by Yusuf Toropov at 2:54 PM

Paprika did not make it. I had to remind her that I don't write children's books, and that the orange tabby in FREED, while based on her, is not named Paprika. (She's named Cat.) 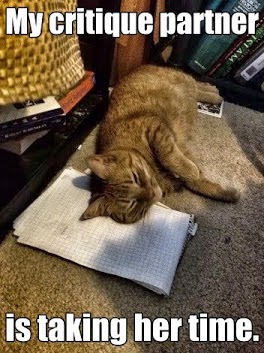 Posted by Yusuf Toropov at 6:20 AM

Why I love Dickens and Shakespeare and Hugo: If something was really important to any one of them, it by God went into the manuscript. Plot or no plot.

Below the photo, you will find a delicious rant that Charles Dickens saw fit to crowbar into his great novel NICHOLAS NICKLEBY for no plausible reason -- beyond his own fury at the relentless piracy of his work in an era when English law did not protect an author's copyright. NICKLEBY, printed in installments, had been the subject of unauthorized stage adaptations hastily assembled by hack writers, even before Dickens had written the last chapter. In this passage, the real author takes his revenge.

(This material is now in the public domain. If it weren't, I would pay Mr. Dickens the royalty due him.) 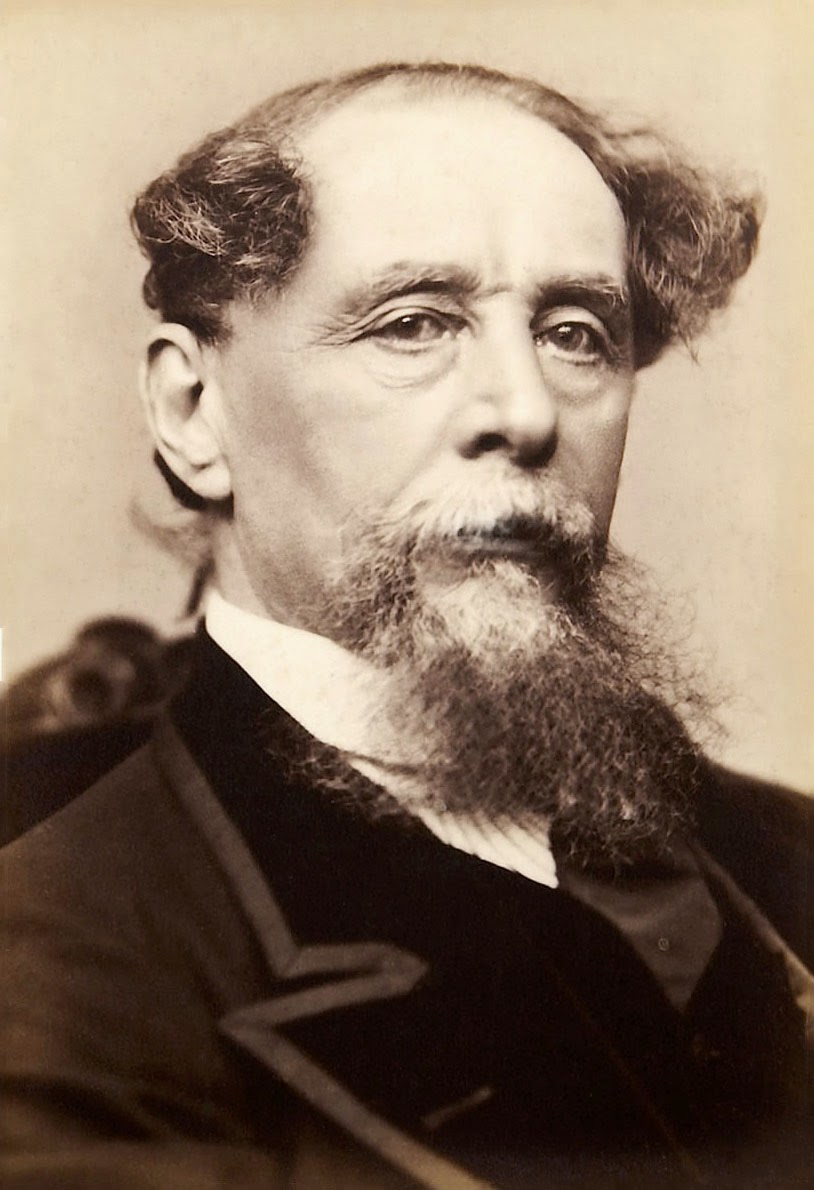 'When I dramatise a book, sir,' said the literary gentleman, 'THAT'S fame. For its author.'

'So Richard Turpin, Tom King, and Jerry Abershaw have handed down to fame the names of those on whom they committed their most impudent robberies?' said Nicholas.

'I don't know anything about that, sir,' answered the literary gentleman.

'Shakespeare dramatised stories which had previously appeared in print, it is true,' observed Nicholas.

'Meaning Bill, sir?' said the literary gentleman. 'So he did. Bill was an adapter, certainly, so he was--and very well he adapted too-- considering.'

'I was about to say,' rejoined Nicholas, 'that Shakespeare derived some of his plots from old tales and legends in general circulation; but it seems to me, that some of the gentlemen of your craft, at the present day, have shot very far beyond him--'

'You're quite right, sir,' interrupted the literary gentleman, leaning back in his chair and exercising his toothpick. 'Human intellect, sir, has progressed since his time, is progressing, will progress.'

'Shot beyond him, I mean,' resumed Nicholas, 'in quite another respect, for, whereas he brought within the magic circle of his genius, traditions peculiarly adapted for his purpose, and turned familiar things into constellations which should enlighten the world for ages, you drag within the magic circle of your dulness, subjects not at all adapted to the purposes of the stage, and debase as he exalted. For instance, you take the uncompleted books of living authors, fresh from their hands, wet from the press, cut, hack, and carve them to the powers and capacities of your actors, and the capability of your theatres, finish unfinished works, hastily and crudely vamp up ideas not yet worked out by their original projector, but which have doubtless cost him many thoughtful days and sleepless nights; by a comparison of incidents and dialogue, down to the very last word he may have written a fortnight before, do your utmost to anticipate his plot--all this without his permission, and against his will; and then, to crown the whole proceeding, publish in some mean pamphlet, an unmeaning farrago of garbled extracts from his work, to which your name as author, with the honourable distinction annexed, of having perpetrated a hundred other outrages of the same description. Now, show me the distinction between such pilfering as this, and picking a man's pocket in the street: unless, indeed, it be, that the legislature has a regard for pocket-handkerchiefs, and leaves men's brains, except when they are knocked out by violence, to take care of themselves.'

'That would be an equally fair plea in both cases,' replied Nicholas; 'but if you put it upon that ground, I have nothing more to say, than, that if I were a writer of books, and you a thirsty dramatist, I would rather pay your tavern score for six months, large as it might be, than have a niche in the Temple of Fame with you for the humblest corner of my pedestal, through six hundred generations.'

The conversation threatened to take a somewhat angry tone when it had arrived thus far, but Mrs Crummles opportunely interposed to prevent its leading to any violent outbreak, by making some inquiries of the literary gentleman relative to the plots of the six new pieces which he had written by contract to introduce the African Knife-swallower in his various unrivalled performances. This speedily engaged him in an animated conversation with that lady, in the interest of which, all recollection of his recent discussion with Nicholas very quickly evaporated. 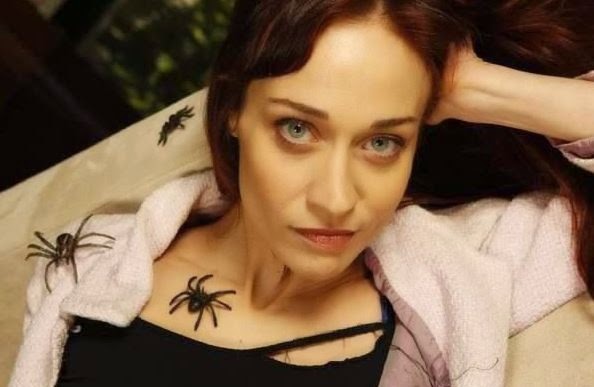 Posted by Yusuf Toropov at 3:49 PM

Back in the day, you bought this soap-- and presumably you still can -- in health food stores. You can also buy it here.

The soap is the best in the world. The labels, the creation of Emmanuel Bronner, son of victims of the Holocaust, make more sense than they at first seem to.

You didn't look at this as another consumer product. At first, you weren't even intending to buy it. But you picked it up and thought, "What the ...?" And kept reading. Hoping FREED has a similar magnetism. 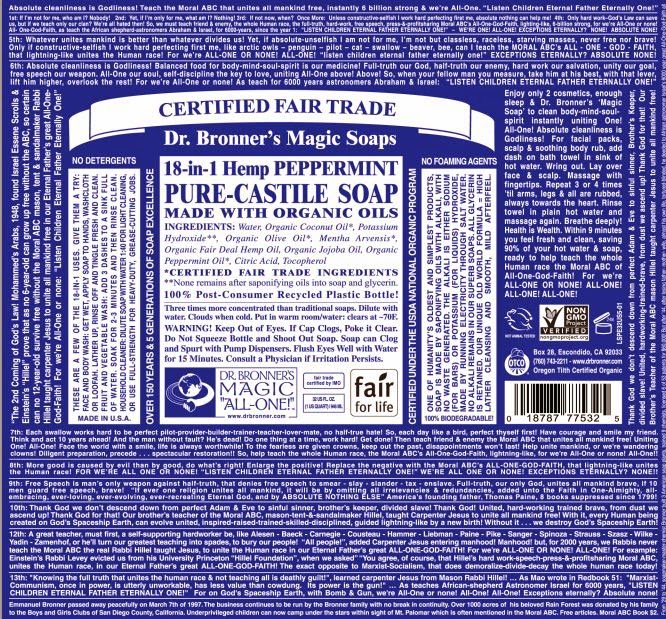 Posted by Yusuf Toropov at 8:35 AM

November is crunch time for FREED

Next month, I will be targeting 1500 words a day, six days a week, on my work in progress FREED. (My typical daily word count is about 500 now.)

If you are a writer looking for solidarity on the creative front during November, keep an eye on this blog. I will be posting my daily word count totals here. You can leave your own totals in the comment box if you want.
Posted by Yusuf Toropov at 5:03 AM

This play of mine, about pedophilia in the Catholic Church, is set in Massachusetts in the early '90s. It was workshopped at the National Playwrights Conference in 1994.

"All good things to those who wait" department: I got a call from a theater last week. It's looking like AN UNDIVIDED HEART will be produced in 2015. Stay tuned for details.