(In my humble opinion. I'm talking about the novels.) 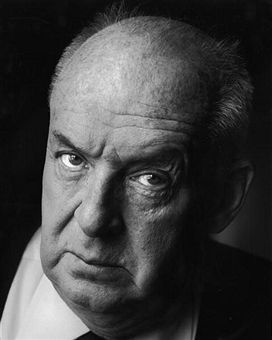 9. "Nature had once produced an Englishman whose domed head had been a hive of words; a man who had only to breathe on any particle of his stupendous vocabulary to have that particle live and expand and throw out tremulous tentacles until it became a complex image with a pulsing brain and correlated limbs." (BEND SINISTER)


7. "It suddenly occurred to me that I was demented and about to do something stupid." (LOLITA)


6. "And I catch myself thinking today that our long journey had only defiled with a sinuous trail of slime the lovely, trustful, dreamy, enormous country that by then, in retrospect, was no more to us than a collection of dog-eared maps, ruined tour books, old tires, and her sobs in the night -- every night -- the moment I feigned sleep." (LOLITA)


5. "If I correctly understand the sense of this succinct observation, our poet suggests here that human life is but a series of footnotes to a vast obscure unfinished masterpiece." (PALE FIRE)


4. "And he absolutely had to find her at once to tell her that he adored her, but the large audience before him separated him from the door, and the notes reaching him through a succession of hands said that she was not available; that she was inaugurating a fire; that she had married an American businessman; that she had become a character in a novel; that she was dead." (PALE FIRE)


3. "The accumulation of consecutive rooms in his memory now resembled those displays of grouped elbow chairs on show, and beds, and lamps, and inglebooks which, ignoring all space-time distinctions, commingle in the soft light of a furniture store beyond which it snows, and the dusk deepens, and nobody really loves anybody." (PNIN)

2. "In other more deeply moral worlds than this pellet of muck, there might exist restraints, principles, transcendental consolations, and even a certain pride in making happy someone one does not really love; but on this planet, Lucettes are doomed." (ADA) (Note from YT: Lucette has committed suicide.)

1. "I hastened to quench a thirst that had been burning a hole in the mixed metaphor of my life ever since I had fondled a quite different Dolly thirteen years earlier."(LOOK AT THE HARLEQUINS!)


And here's a bonus Nabokov sentence, one that didn't come from a novel, and thus, I think, should not have been eligible for consideration, but still rocks my world every time I read it. This one cheats by means of a semicolon. You and I can't get away with such stuff.