Careful. The gifted Irish writer Frankie Gaffney, no Islamophobe or conspiracy theorist he, happens to bear the name of a prominent, deeply paranoid right-wing activist in the USA -- Frank Gaffney. The relevant Amazon searches can be instructive. Their lesson: People can and do surprise you, even when -- especially when -- you think you already know who they are.

Gaffney's wonderfully erratic debut novel DUBLIN SEVEN carries a similar lesson about its protagonist Shane Laochra, an aspiring, doomed coke dealer. You may think, in the early going, that you already know all you will ever need to know about Shane. But the deeper you get into the novel, the more clear it becomes that both you and Shane have a lot to learn.

No matter how tempted you may be to dismiss him as a blundering, self-absorbed lowlife -- and no matter how accurate those dismissals of yours may be -- you come away from the book unexpectedly glad you met Shane, as regretful of his many troubles as he is, and convinced that his big questions about life, death, and love are your big questions, too. It's a powerful, gruesome book, every bit as prone to excess as its hero. And from where I sit, it's essential.

Shane gets in over his head, makes big mistakes, and annoys any number of powerful enemies in Celtic Tiger-phase Dublin. "The only prospect of security that he could imagine," Gaffney informs us, "was being feared." The book is amply supplied with scary, crazy stuff like that, and also with banter that consistently rings both funny and true. No small achievement.

Gaffney's mastery of gritty local slang makes this compulsively readable novel specific to a certain time and place. Yet his great gift is for dialogue, and that gift fuels and universalizes this story. Hilarious, harrowing, and way, way over the top, the novel is a vibrant, loving portrait of an unforgettable adrenaline freak. There are bits I would have cut, but there you go. Dublin Seven goes too far, too fast at times, which I suppose is the point. In the end, it uses that wild ride to make you challenge your assumptions and ask better questions than you would have otherwise asked. It rewards close examination. It delivers some dangerous, highly intoxicating goods. And if Gaffney's superb debut manages to evoke another book about Dubliners from another century, well, that's just a pleasant bonus. 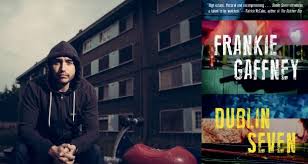 Posted by Yusuf Toropov at 4:18 AM